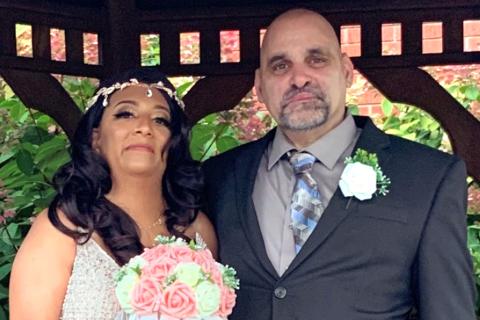 Frank & Alisa
Heart Recipients
New York
“I'd either drop dead or I’d have a normal life. I was so tired of waiting, so sick of being in the hospital. Whatever happened, I wouldn’t be sick anymore.” – Frank

Like many couples, Frank and Alisa met online. When Frank first saw Alisa’s picture, he felt a tug at his heart-strings and sent her a message introducing himself. But these two hearts had something extra special in common – both Frank and Alisa are heart transplant recipients.

He was an old hand who received his transplant 18 years ago.

Frank knew about his family’s history of heart disease. Although he stayed fit, he “couldn’t hide from genetics.” At 32, he tested positive for an inherited heart condition called cardiomyopathy. The next 12 years, he was in and out of medical facilities for a blur of treatments. But, Frank kept fighting. He was determined not to leave his young children fatherless.

Still, his decline continued. In 2003, a new doctor recommended transplantation and Frank knew that the operation was his final chance – “I'd either drop dead or I’d have a normal life. I was so tired of waiting, so sick of being in [the hospital]. Whatever happened, I wouldn’t be sick anymore.”

For Alisa, heart disease was a sudden discovery. It ran in her family too, but it wasn’t until her son's diagnosis that she understood her own lifelong health troubles. In April 2017, she went in for testing, and the results were clear: this was the end of the line for Alisa’s heart.

She joined the transplant waiting list and spent nine long months hoping for the call that finally came. She had a donor match! After the initial shock, Alisa felt oddly calm. “I got to the point where I said ‘I'm going to wake up, and everything is going to be okay. Or I won't wake up, and I won't know.’” Fortunately, it was the former. The transplant was successful.

Post-transplant, Alisa looked for information in the Facebook group where she met Frank. She responded after he introduced himself, and the two began talking daily. They soon decided to meet in person, and the chemistry was still there. After several in-person visits, Frank felt the time had come for a new operation. He proposed on Christmas in front of all their kids, and Alisa said yes!

Both say their transplants and their lives afterward seem like a miracle. They held on through tough times for their families, but the good that came from the gifts they received went on and on. Frank and Alisa were blessed with something beyond health and time with their children – they found a new lifetime of love in one another.

You can make more life-saving possible. Learn about signing up as an organ, eye, and tissue donor.

Frank and Alisa’s story is courtesy of The Center for Donation & Transplant in Albany, New York.