Transplant Cures Cancer to Put Cheerleader Back on Top 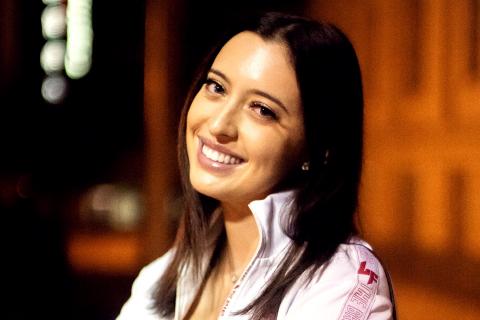 Kathryn
Liver Recipient
Maryland
“I’ve seen the lowest of lows. The only thing you can do is be positive.” – Kathryn

Can a positive attitude be a gamechanger? It was for Kathryn. As a longtime competitive cheerleader, she was thrilled to make her high school's varsity team as a rising freshman. But she felt worse and worse as fall approached.

Kathryn was dizzy and tired. She couldn't stop vomiting and her doctor thought it might be a parasite. It wasn’t. She felt a hardness in her stomach that tests revealed masses on her liver. She had hepatocellular carcinoma.

This rare form of liver cancer isn’t linked to genetic factors. Incredibly aggressive, it often spreads before detection and the patient doesn’t survive more than a few months. Kathryn’s cancer was only in her liver, so she might survive. But she'd need chemotherapy and a liver transplant.

While her friends settled into the frenzy of football season, Kathryn spent two months in the hospital. Persistent nausea and chemotherapy led to weight loss. She depended on feeding tubes and watched her muscular physique melt from peak health to “bald with bones.”

Doctors in Maryland, Virginia and Washington DC, turned Kathryn down as a transplant candidate. Some of her tumors were so big they disqualified her for a transplant. It was also likely that the cancer would spread. Doctors didn’t believe a transplant would work.

Her parents found a willing doctor in Delaware, but their health insurance sent them to Pennsylvania. There, new tests revealed a dire setback: Kathryn’s tumors were growing again. The doctors said that even with a transplant, she’d be lucky to live another year. Her cancer would return. It wasn’t worth it.  Her parents were in disbelief – how could saving a child’s life not be "worth it”?

Kathryn never doubted she'd get better until that moment. Hopelessness hit her all at once. At 14, she started thinking about her bucket list. Then she stopped. She wasn’t ready to give up, and neither were her parents.

They returned to Delaware, where Kathryn had more chemo. The Delaware doctor asked the Transplant Review Board to approve a transplant for Kathryn, describing similar cases with positive outcomes. He also joined her parents in negotiating approval from their insurance provider.

Their perseverance was rewarded – the insurance company agreed to help cover the cost of the transplant. And the new chemo regimen was working. There were no new masses, and the tumors were small enough that Kathryn qualified for a transplant.

On April 30, 2002, the final piece fell into place: Kathryn had a donor match for the surgery that would save her life or seal her fate. It took 12 hours, but the liver transplant was a success. A year after being diagnosed, she was cancer-free.

Kathryn spent the rest of high school regaining her strength. The summer before her first year of college, she asked the University of Maryland cheer coach for a tryout. The coach agreed, and Kathryn sealed the deal. She made the cheerleading team! Thanks to her donor, Kathryn had a second chance at the opportunity that slipped away years earlier when the routines of life came tumbling down.

With her 10-year transplantiversary approaching, Kathryn is still amazed that she pulled through. She set her phone to flash the same message every day at noon: “Today is the best day of your life.” When she sees it, she smiles at the possibilities. Each day is special, and small stressors don’t phase her. “I laugh it off because I’ve seen the lowest of lows. The only thing you can do is be positive.”

It took every bit of that positivity, plus perseverance, prayers and an incredible gift, but Kathryn came out on top.

Want to do something positive today? Sign up as an organ, eye, and tissue donor to gift hope and healing.