The Real Heroes Are the Donor Families 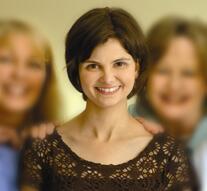 Amelia
Liver Recipient
Kentucky
"The real heroes are the donor families. I look at it this way: there could have been two tragedies, but my donor family turned their tragedy into a blessing. I’m forever grateful." — Amelia

A strong will, determination, and the miracle of organ donation have kept illness from standing in the way of a young woman’s dreams.

“All through high school, I knew something wasn’t right, but I didn’t want to worry my parents. All I wanted to be was a normal teenager, graduate high school, and attend the University of Kentucky. I guess you could say I was a good actress,” Amelia has said.

Amelia did graduate from high school. “I remember thinking at graduation that it was a miracle that I was alive.” Yet, she still kept silent about the symptoms which she learned only later were those of liver disease.

The week before she was to leave for the University of Kentucky, Amelia could no longer deny that something was wrong. “I started having terrible stomach pain and then I woke up one morning and I couldn’t walk and my skin was yellow.” A biopsy of her liver found she had cirrhosis. “I just remember being so embarrassed,” Amelia said. “How can I have cirrhosis? I never drank! After the initial shock, all I was concerned about was whether I could go to college.”

Amelia’s doctors doubted that she would be able to handle college. But nothing would stop this Kentucky girl. Her parents helped Amelia move into her dorm two days after her biopsy, and she successfully completed her first semester. “When I came home for Christmas break the doctors told me my disease had progressed and I would have to go on the transplant waiting list. I thought it would be a six-month wait. I didn’t have a clue. The hardest part of this whole process isn’t the recovery, it’s the waiting.”

Back at school, Amelia took a full course load and summer classes. She was afraid she wouldn’t live to see graduation, but she did. “I was involved in everything. I promoted the Challenge to promote organ and tissue donation on two campuses.”

After four-and-a-half years on the waiting list, Amelia received the phone call that a donor liver was available. “I was really lucky to still be alive at that point. The problem with waiting for an organ is that so many other organs are affected and so many things can go wrong.” For Amelia, her transplant came just in time.

“The real heroes are the donor families. I look at it this way: there could have been two tragedies, but my donor family turned their tragedy into a blessing. I’m forever grateful.”

Amelia wrote to her donor family, and the organ procurement organization forwarded the letter. “It took a while, but I heard back from my donor’s mother. She told me that her son was a helpful person who loved people, and if there was a way for him to help others he would do it.”

Today, the mother of Amelia’s donor keeps a picture of Amelia and her son next to each other on her mantle.