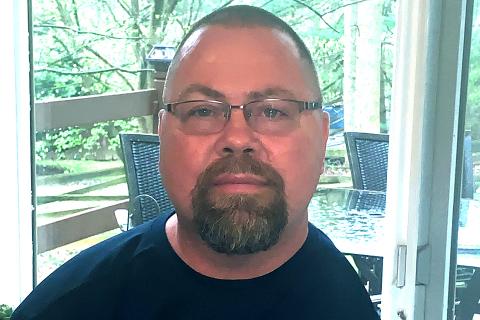 Daniel
Hand Recipient
Maryland
“I'm looking at myself, what was left of me, but I still had my mind. So everything told me to fight so my son could have his father." – Daniel

Daniel felt sick one day in 2017. He assumed it was the flu. When his symptoms worsened, he went to the ER. The next thing he remembers is waking up two weeks later without his limbs.

Amputations were necessary to save Daniel’s life. A flesh-eating bacteria attacked his body and caused his blood pressure to plummet. To save him, doctors used a drug that drew blood from his limbs to his core to protect his vital organs. It kept Daniel alive, but it also caused gangrene, a severe infection, in his hands and feet.

After the doctors removed the dead and infected tissue, Daniel was left with both legs amputated below the knee and no left arm or shoulder. His right arm remained with a palm, half a thumb, and a few fingers. But the fingers were soon lost to the infection too.

As Daniel tried to make sense of his new reality, he made a choice. He knew that his condition would turn his wife into a caregiver, and his young son, too. He refused to let negativity make it worse. “I didn’t want to be the miserable person at home who you have to take care of.” He committed to staying positive no matter what.

It wasn’t easy. Without functional hands or feet, Daniel’s life was very different. Unable to work, he was stuck at home, but his wife still worked. Although she dressed him in the morning, she couldn’t be there to feed him lunch. Instead, she’d prepare a plate of food and leave it on the counter. Daniel had to eat it without hands, using his mouth “like a dog.”

Before the amputation, Daniel coached his son’s baseball team and the two played basketball for fun in the driveway. Afterwards, he found himself on the sidelines. He had to fight the sadness that struck when he'd watch his son shoot baskets all alone.

Staying positive was Daniel’s only focus for two years. That all changed when he saw a video of a hand transplant recipient. It inspired him to dig up information about the Duke Transplant Center that a fellow amputee had shared with him two years before.

Daniel quickly realized how dramatically a hand transplant could improve his quality of life. Most importantly, increased independence would relieve the burden on his family. He contacted the hospital, visited for testing, and was approved for surgery. A few months later, Daniel’s doctors identified a donor match and he traveled to Durham, North Carolina, for a hand transplant.

The operation was a success and did more than restore function for Daniel – it restored his dignity. Every time he showers or dresses or feeds himself with his new hand, he’s grateful for the opportunity. He can cook dinner, help with household chores, and even play catch with his son. He feels like he’s able to “be a dad again.”

Daniel especially loves seeing his wife and son smile at small moments of triumph. He’s even picked up painting. His attitude hasn’t really changed – Daniel is still relentlessly positive and committed to gratitude. But now, thanks to his donor, he has far more to be grateful for.