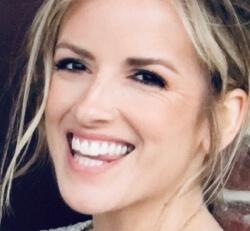 Haley
Five-Organ Recipient
Indiana
The onset of a rare blood condition eroded Haley’s quality of life in every way, until a five-organ transplant sent her spinning in a new direction.

Haley had always been healthy – she was even training for a half-marathon. She was 24 years old and never had any serious illnesses. So, why was her hair falling out?

Doctors were baffled. Weight was melting off Haley’s trim frame, and her nails were coming off. Abdominal pain and swelling plagued her constantly, and she struggled to keep food down. But the doctors couldn’t pinpoint a cause.

The answer came in September of 2014, when Haley’s pain became unbearable. A dash to the hospital and emergency surgery revealed that a genetic condition caused a blood clot to form in her liver. The clot cut off circulation to her intestine, almost destroying her liver. Her body’s immune reaction, in turn, damaged several other organs.

Haley’s doctor recommended a five-organ transplant surgery, but she was worried about the quality of life she would have after the procedure. She decided then: “I wouldn’t have a transplant. I would learn to adapt.” She stuck to an ultra-limited diet and contacted doctors all over the country to find an alternative.

Haley went from working full-time to living off disability benefits. She couldn’t drive or gain weight. The constant pain was so intense that she could barely walk or stand up straight. Over the months, toxins caused by the organ damage lodged in her brain so she couldn’t focus or think clearly. This pain was more than physical – it was hurting her mind.

By June of 2015, Haley had exhausted her options. Her doctor told her the only fix was a multi-organ transplant, and she needed it now. With her blood type, body size, and condition, he expected a short wait – hopefully thirty days or less. He wasn’t sure she’d last much longer.

After two false alarms, she got the call: she had a match.

The transplant, which included a new stomach, pancreas, liver, and small and large bowel, was a success. But the recovery was long. Haley was in and out of the hospital for a year, and the pain was still a constant companion.

With time, she reached a moment she’ll never forget: one that was pain-free. She remembers visiting a lake with her family and thinking, “I can’t believe I’m here, I don’t have a line in me, I’m three hours from the hospital, and I don’t feel like I’m going to die. It’s just incredible!”

Five years post-transplant, Haley is feeling like a normal, healthy person and is enjoying her new freedom. She’s gotten to know her donor’s daughter and wants to “make sure she knows her mom saved my life.” Haley also visits patients awaiting multi-organ transplants to hear their stories, share hers, and offer encouragement.

She doesn’t know what the future holds, but the present is full of possibilities. And with each pain-free moment, she thanks her donor for the gift of life.

Give yourself a chance to pass on hope to those in need sign up as an organ, eye, and tissue donor today.