94 Floors and One Amazing Story 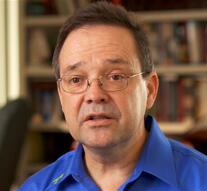 Steve
Double Lung and Kidney Recipient
Illinois
“It’s an incredible gift, and there’s no age limit on who can give, and who can’t.”

Every year, Steve does something few people would even consider: He climbs 94 floors of stairs up to the top of the Hancock Building in Chicago, all in the name of charity. “It’s called ‘the Hustle Up the Hancock’,” he says, “and I do it in honor of my donor.”

Steve’s feat is even more impressive, considering that for many years, he struggled simply to breathe. “I was born with cystic fibrosis,” he says. “And in the months before my transplant, I was on oxygen and in a wheelchair. The therapy, just to keep me alive, was excruciating. My therapists had to physically pound on my chest for four hours, twice a day, to clear my lungs. I had ribs broken to keep me alive.”

With perhaps only a few weeks to live, Steve received the gift of a double-lung transplant. He also learned that his donor was a young woman who was a college athlete. Overcome with gratitude for the gift he was given, he has worked to stay in touch with her teammates, to help keep her memory alive.

Those efforts resulted in a second gift. When Steve learned that his kidneys were failing, one of his donor’s teammates chose to become a live kidney donor. With three organs, Steve now jokes that he’s one-sixth a member of the college team.

When asked about how it feels to be able to breathe again, Steve says that it’s impossible to answer—because he had never been healthy in the first place. “I spent years with 10% lung capacity,” he says. “To see on the monitors in the hospital that I was breathing room air, on my own, at 85% lung capacity...that’s when I lost it. I’ve never known that breathing could be this easy, or that life could be this good.”

Steve now works with other patients who are on the waiting list, helping them to prepare for the wait. “I show them what’s possible,” he says. He encourages everyone to sign up as a donor, as he has. “Wouldn’t you like, when you left this beautiful planet, to change a few lives on your way out?” he asks. “It’s an incredible gift, and there’s no age limit on who can give, and who can’t.”